skip to main | skip to sidebar

At its recent congress, Russia’s ruling United Russia party nominated party leader, Vladimir Putin, as its presidential candidate in next year's election. The nomination seems to be only a formality because the plan to swap roles between now-President Dmitry Mededev and now-Prime Minister Putin was announced by them some two months ago. The voting bulletin for the nomination of a presidential candidate included only one name: Vladimir Vladimirovich Putin. Although formally the voting was “secret,” in practice those party congress participants who wanted to vote against Putin would have had to openly strike his name off the bulletin. Nobody voted against Putin, though. 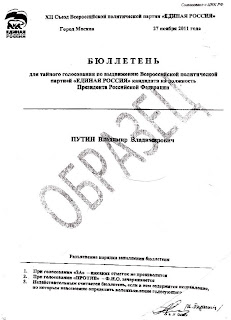